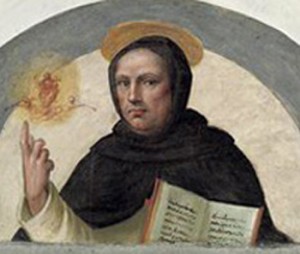 Today, we Dominicans commemorate the feast day of St. Vincent Ferrer (1350-1419). He was an outstanding preacher whose passion and zeal for the salvation of souls knew no bounds. There is much we can learn from him today.

His early years – Prior to his birth in Valencia, Spain on January 23, 1350, Vincent’s parents, William and Constance, had several experiences which led them and others to understand how uniquely gifted would be the child in Constance’s womb.

A Dominican friar appeared to William in a dream and told him he would have a son who would be a “prodigy of learning and sanctity,” whose wondrous deeds would be known throughout the world, who would fill “heaven with joy and Hell with terror,” and who would accomplish these things as a Dominican priest.[i]

Sometime thereafter, a blind woman’s sight was restored immediately after she prayed, at Constance’s request, that the child Constance was carrying would arrive safely. “Madam,” exclaimed she who was once blind but could now see, “it is an angel you have, and it is he who has cured me of my affliction.” [ii]

While Vincent was a mere infant, Valencia suffered a prolonged and difficult drought despite the offering of public prayer. Her infant son startled Constance one day by speaking and telling her: “If you wish for rain, carry me in procession, and you shall be favorably heard.” [iii]The townsfolk did so and the drought ended.

His extraordinary intelligence and piety were apparent to all. Vincent assisted at daily Mass. He would later refer to the Mass as “the most sublime work of contemplation”. Not surprisingly, he had a tender devotion to Our Lord’s Passion, honored the Blessed Mother as his spiritual mother, fasted regularly on Wednesdays and Fridays, and had a great love for the poor. He began the study of philosophy at age twelve and his theological studies at age fourteen!

Entry into the Dominican Order–William escorted his eighteen year old son to the Convent of the Friar Preachers in Valenciaon February 2, 1367 where Vincent began his novitiate in what was to be the first of his 50 years in religious life. He was clothed in the Dominican habit three days later, and demonstrated by the following comments that he understood the nature of his Dominican vocation:

“Our Order does not lead its subjects to Heaven by the ladder of the contemplative life alone, nor by that of the active life only, but it enables them to ascend to the conquest of paradise by means of both. They who are in the simple monastic state reach Heaven by the ladder of contemplation; and it is by ascending that of the active life that the military orders arrive at the possession of their country. But the children of St. Dominic must have a foot on each, by uniting the exercises of prayer and study to the work of apostolic preaching.” [iv]

During the years of his formation, Vincent devoted himself to three things “a friar Preacher who desires to labor fruitfully for the good of souls” must do: “assiduous prayer, the study of theology and Holy Scripture.”[v] Since our Saint was such a gifted student, the Order sent him first to teach and then to continue his own education. He taught logic and philosophy in Valencia for three years and then taught at Lerida for two years. He spent the next three years in Barcelona intensely studying Holy Scripture, reportedly memorizing all of It.

While study and teaching were and are essential pillars of all Dominican vocations, Vincent was mindful of the spiritual pitfalls these practices posed. It is for that reason that “his heart was always fixed on God and he made his studies, labor and all his other actions a continued prayer” – a practice he proposes to all of us in his Treatise on the Spiritual Life:

“Do you desire to study to your advantage? Let devotion accompany your studies, and study less to make yourself learned than to become a saint. Consult God more than books, and ask Him, with humility, to make you understand what you read. Study fatigues and drains the mind and heart. Go from time to time to refresh them at the feet of Jesus Christ under His cross. Some moments of repose in His Sacred Wounds give fresh vigor and new lights. Interrupt your application by short but fervent and ejaculatory prayers; never begin or end your study but by prayer.” [vi]

Miraculous Preaching Apostolate– During Vincent’s lifetime, two different men laid claim to the throne of Peter, causing a destructive schism in Christ’s Church. He had this to say about the spiritual condition of his world:

“I do not believe that there ever existed in the world so much pomp and vanity, so much impurity, as at the present day; to find in the world’s history an epoch so criminal, we must go back to the days of Noah and the universal deluge. The inns in the cities and villages are filled with persons of abandoned character; they are so numerous that the entire world is infected by them…Avarice and usury increase under the disguised names of contracts. Simony reigns among the clergy, envy among the religious. Gluttony prevails to such an extent in every rank of social life that the fast of Lent, the vigils and Ember Days, are no longer observed…In a word, vice is held in such great honor that those who prefer the service of God to that of the world are held up to scorn as useless and unworthy members of society.”[vii]

These concerns caused Vincent so much sorrow that he became grievously ill. He was immediately healed after Our Lord appeared to him saying: “Arise and be consoled; the schism shall soon be at an end, when men have ceased from their iniquities. Arise, then, and go preach against vice, for this I have specially chosen you. Exhort sinners to repentance, for My Judgment is at hand.” [viii]

Thus began the twenty-one year miraculous preaching ministry of this humble and gifted servant, whom Pope Pius II was later to describe in his bull of canonization “as the Angel of the Apocalypse, flying through the heavens to announce the day of the Last Judgment, to evangelize the inhabitants of the earth, to sow the seeds of salvation among all nations, tribes, peoples and tongues and to point out the way of eternal life”.

He traveled tirelessly throughout much of Western Europe, “awakening the dormant consciences of sinners” preaching, and converting not only lapsed and tepid clergy, religious and lay Catholics but thousands of heretics, Jews and Muslims. The chief cause of the error and heresy he encountered, Vincent felt, was due to ignorance and the total absence of preaching. “I blush and tremble” once said the Saint, “when I consider the terrible judgment impending on ecclesiastical superiors who live at their ease in rich palaces, while so many souls redeemed by the Blood of Christ are perishing. I pray without ceasing the Lord of the harvest that He send good workmen into His harvest.” [ix]

Vincent “made the last Judgment that awaits each of us in the moment of death concrete and dramatic, showing the universal judgment in all its splendor and all its horrors.” He called his listeners “to repentance, reformation of conduct and new life.” [x]

There were no buildings large enough to accommodate the tens of thousands who came to hear him preach on the pending Judgment of God and the need for repentance. All who came, regardless of how far they sat from where the Saint positioned himself or what language they spoke, were able to hear and understand every word the Saint uttered – even though Vincent spoke only “the Valencian dialect” and did not have the benefit of modern sound systems!

Vincent always traveled on foot. Before entering any city, he would kneel and pray for the people to whom he was about to preach. He next went before the Blessed Sacrament asking God to make his preaching fruitful. He slept on the ground and for only five hours. He rose at daybreak, went to confession, recited the Divine Office, offered Mass, preached, blessed the sick, joined other priests who traveled with him in hearing confessions, and engaged in spiritual reading and meditation.

In the evenings he had a companion ring the “Bell of Miracles” during which time many were cured of long-standing physical and spiritual ailments. On one occasion in Salamanca he raised a woman from the dead. He restored the use of a crippled boy’s limbs after physicians had judged his condition incurable. This boy later became the Bishop of Salamanca. At another time, he returned speech to a woman in Valencia but told her to remain silent for the rest of her life or risk the loss of her soul. She complied with his instruction. He frequently multiplied bread, wine and other foodstuffs.

Interestingly, when one man doubted he was the father of a child born to his wife, the Saint, in the presence of a large crowd, directed that child (who was only a few days old) to“leave your mother’s arms and go in search of your father in the midst of this great crowd of people”. This child miraculously received the use of his feet, walked unassisted through the assembly, seized the hand of his mother’s husband and cried out: “This is my father; I am really his child.” [xi]

Despite the numerous miracles, tens of thousands of conversions and other obvious fruits that flowed from his apostolate, Vincent never lost his sense of humility. He always made prayer the principal preparation for his preaching. On the one occasion he substituted study for prayer, his sermon failed to impress a certain nobleman who heard it. The next time Vincent preached to this gentleman, the Saint prayerfully prepared his sermon before the Crucifix. His words that day made a deep impression on the nobleman’s soul. When Vincent heard of the nobleman’s reaction, the Saint remarked: “in the first sermon it was Vincent who had preached but in the second, it was Jesus Christ.” [xii]

Vincent died in Vannes, Brittany on April 5 1419. He was canonized by Pope Calixtus III on June 3, 1445, fulfilling a prophecy the Saint had made to the Pope’s mother in 1378 that her son would become Pope and one day canonize Vincent. It is also worth noting that Vincent’s brother Boniface became General of the Carthusians.

All of us, whether or not we are Lay Dominicans, would be well-served to study those of this Saint’s sermons and writings that have been preserved[xiii]and most certainly his Treatise on the Spiritual Life[xiv]wherein, among many other pearls, he succinctly sets forth the affections we ought to exercise toward God, ourselves and our neighbor, the fifteen perfections essential to those who serve God, the three things we ought to fear and fly from, the three things we should most eagerly embrace, and the three things which should be the principal object of our meditations.

We can give glory and consolation to our Lord, as well as an appropriate tribute to Saint Vincent if we would make his prayer our own:

“Good Jesus, let me be penetrated with love to the very marrow of my bones, with fear and respect toward You; let me burn with zeal for Your honor, so that I may resent terribly all the outrages committed against You, especially those of which I myself have been guilty. Grant further, O my God, that I may adore and acknowledge You humbly as my Creator, and that, penetrated with gratitude for all Your benefits, I may never cease to render You thanks. Grant that I may bless You in all things, praise and glorify You with a heart full of joy and gladness, and that, obeying You with docility in every respect, I may one day, despite my ingratitude and unworthiness, be seated at Your table together with Your holy angels and apostles to enjoy ineffable delights. Amen.” [xv]